Making our Filter in Turn safer 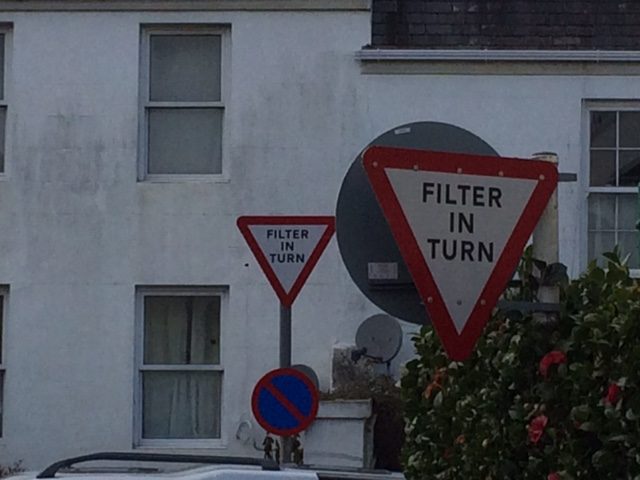 In South Africa, they call it the four-way stop, and there is little room for confusion on the part of motorists. You reach an intersection, you are obliged to stop. Common sense avoidance of disaster follows – drivers take it carefully in turns before heading in their chosen direction.

This novel solution for preventing accidents has additional advantages – no need for traffic lights for a start. There are also decent penalties for not obeying the rule which glares at you from signs planted on each approach road.

Guernsey, tucked away in the Channel Islands off the coast of France, has its own version of the four-way stop. It is one of which locals are particularly proud, inasmuch as they regard it as their unique invention. The trouble is, the rules are less clear, and accidents are more likely than at a four-way stop.

The Guernsey invention is the ‘Filter in Turn.’ It operates at four-way and three-way intersections – not all of them, just chosen ones. They are more common than traffic lights or roundabouts, but less common than a simple solid yellow line requiring vehicles to stop.

Mostly they function pretty well, thanks in good measure to the well-known good manners of Guernsey motorists. A cheerful wave, a thumbs-up thank you in return, and the traffic passes in ordered fashion.

Except, except…to the average driver, filter in turn means exactly what it says, viz. whoever gets to the intersection first goes first. Yet in practice life isn’t like this. For one thing, the filtering is (obviously) to be done in turn. If there is any doubt, this is typically achieved with a few helpful waves of the hand from drivers waiting to go.

The Big Trouble occurs when you are close behind a car which has just taken its turn, and the next car coming from the left or right is, say, 75 yards away. You arrive at the intersection before the approaching vehicle. Is it your turn, or his?

If he feels strongly that it is his turn, and you decide to cross in the belief that you arrived at the intersection before him (which you did), it is an accident waiting to happen, and at the very least there will be a lot of angry hand gestures and swear words.

What motorists forget in all the mess is another unspoken rule – that you should slow down at an intersection. If followed, this means that the vehicle 75 yards away in the above example cannot possibly arrive before you, and should therefore take its turn.

The accidents occur because the approaching driver usually does not slow down. Result: the careful driver, even though he has right on his side, chooses not to go ahead. He thus inadvertently but out of his own sense of danger reinforces the incorrect interpretation of the rule.

Fortunately in Guernsey, the maximum speed limit is 35mph. Accidents happen, including at filters, but few of them are fatal. In South Africa, by contrast, the death toll on the roads is among the highest in the world. But the requirement to stop at an intersection makes sense.

Things don’t change easily in Guernsey, so a stop rule is unlikely to be adopted. After all, the filters at least keep the traffic moving. There is one other indubitably attractive feature. If the traffic lights fail, no one suffers any bother. ‘Filter in Turn’ is the default mode for everyone. Clever.