A decision has been made against a longer airstrip – or has it? 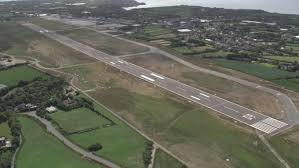 Since the middle of last year, public debate in Guernsey has been loudest over the question of whether Guernsey should have a longer runway.  A review of options by the consultancy arm of PwC was produced for the island’s top politicians in September.  Better late than never, this is due to be published in time for the March meeting of the States assembly.  But the senior Policy & Resources Committee has set its face against spending money on the project unless the assembly directs it to.

So far, so simple.  However, there are enough wrinkles in this to impress Methuselah:

The position regarding the extension itself appears to be as follows, based on work done by enthusiasts for the idea:

The crucial point in all this is that there is a matrix of possibilities from 1,700m onwards where the runway would become attractive for most aircraft (Airbus 319 and 320, some Boeing 737s, and long-haul corporate jets) – as the example of our sister island’s runway (at 1,700m) already shows.  Yet key political leaders have apparently set their face against such a prospect.

Cost seems to be a factor, but at this stage it is almost impossible to estimate the position.  The PwC report is thought to refer to a cost-per-square-metre figure to lengthen a runway, but this not only depends on traffic volumes and the type of aircraft using it, it also excludes any evaluation of the local benefits.  A full cost-benefit analysis would have to consider the impact of opening the Gatwick route to airlines other than Aurigny.  The answer may depend critically on whether there is also a visitor-attracting improvement in the local tourist offering.

In other words, there is a world of difference between assessing runway-lengthening costs on the basis of monetary outgoings and doing so on the basis of a project which might be an “economic enabler.” As to the cost of such a second phase study by PwC, if this and Phase 1 were to cost, say, £500k, and the runway extension came with a price-tag of £100m, at what point is the cost of PwC’s work too prohibitive to consider?  Surely not at 0.5%, and especially not if it includes an assessment of the knock-on benefits, which local business bodies say will rise eventually to £100m.

Those who have followed this debate have found it surprising that two key figures in the government have decided their position in advance, leaving their peers stranded and the assembly in an invidious position.  This body has in the past willingly decided many things on the basis of majority vote – one thinks of the decision in 2015 to prevent any work on a sales or expenditure tax, or the decision to overhaul the secondary school system, or to have a flawed referendum on island-wide voting.

Now we have this decision on a key element of future infrastructure.  The island’s assembly is supposed to operate on the basis of consensus, but on some issues this has proved seriously problematic.  One can only hope that, whatever the decision and whenever it comes, it will spring from a rational assessment of the facts, and not because of inhibitions about establishing them.