Air links: How to make today’s most important infrastructure decision

To juggle you need balls. Who has them on this multi-faceted issue? 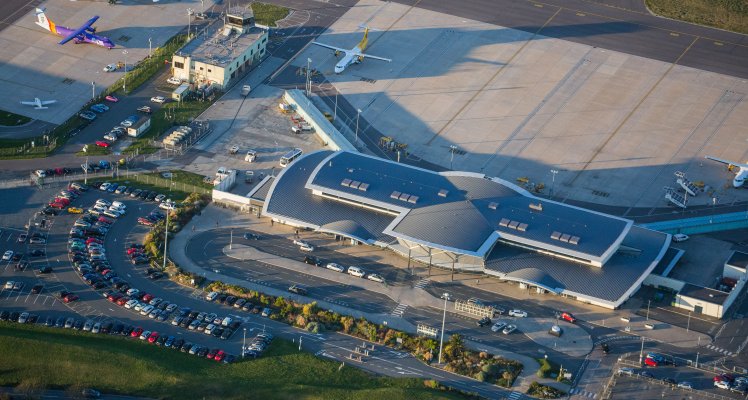 Unbeknown to many until recently, a team of experts from the consulting and audit firm PwC is currently investigating the case for, or more likely against, a lengthening of Guernsey’s runway.  The issue is a linchpin in determining what to do about the single most important short-term strategic problem confronting the island, namely the reliability and cost of its air links with the outside world.

It is often said that, if you wish to learn how to juggle, you start by holding a single ball in one hand, lobbing it upwards and catching it repeatedly.  The runway problem is much like that: the island’s government has been tossing it around, worrying about the problem it has on its hands.  Yet in reality it is just one of many balls it must quickly learn to juggle, all of them related.

Everyone agrees that the air links issue is existential for the island, but not everyone recognises how multi-faceted it is.  Apart from the length of the runway, we have:

Amid all this, ministerial-level deputies seem happy to signal their positions as though these issues were separable.  Knowledgeable members of the public are quietly pushing their own barrows in social media and through local press and broadcast outlets, and representative business groups are meanwhile wringing their hands at the lack of reliable evidence and the mystifying lack of direction.

Start with the runway.  It is too short.  If it was longer and modern landing aids were then installed on the ground, it would be able to take fully-loaded higher-capacity jets like the Airbus 319 and Boeing 737, and costly fog disruption would diminish as these aircraft carry instruments to help counter bad weather.

That would stimulate lower fares, encourage more visitors and probably promote more business overall – not just for the finance sector, but for the tourist industry and the island generally, including outbound travellers from Guernsey.  Some say the tourist infrastructure is not ready, but it is easy to approve plans to improve our disused hotels.  In the now-tiresome jargon, we would have an “economic enabler” – assuming of course a political willingness to pursue it.

On the runway itself, one deputy says it ought to be simple in construction terms and relatively cheap to lengthen the pavement by some 120m (from 1,460m to 1,580m), and he is eager to have this corroborated.  But it is not really enough to achieve the kind of length needed for the main purpose, which is 1,750m-1,850m for Airbus 319s/320s and 2,000m for safety assurance.  Longer may be more costly, but may equally yield better returns overall.

It would also take time to carry out this bigger work – perhaps five years, though that needs challenging – and it might cost anything between £25 million (according to the optimists) to £80m (according to those who say it will be too expensive), another “fact” which needs evidential backing.

Based on the old adage that “if you build it, they’ll come,” the assumption is that the airlines will take advantage of the new infrastructure and open skies policy to fly to Guernsey.  But they won’t be coming from Gatwick unless Aurigny’s monopoly ends, and they certainly won’t be coming from Heathrow, as it will be some ten years before the extra capacity of its third runway materialises.

This brings us to the next aspect, namely Aurigny’s fleet.  The airline’s single Embraer jet has an indisputable feelgood factor in terms of travel comfort and speed – and for that matter, pride in representing the island.  But there is no redundancy, and it never runs at optimum efficiency doing 35min runs to and from Gatwick, landing and taking off in a marine environment.

Many wonder whether it was worth the maintenance costs and the c.£50m capital outlay, but there was little doubt that a larger aircraft was necessary in order to maintain adequate services to Gatwick after FlyBe withdrew from that route.  Apparently the cost of leasing the jet was on a par with acquiring it.  Either way, it is even more economical if you can rotate a fleet rather than run one jet.

As for the existing ATRs, these are of different vintages and sizes, but will need replacing at some point.  The company making them seems keen to do a deal selling its newest ATR-600 models with their much-vaunted “clear vision” technology – based on a GPS and sensor system lying like a bubble on the nose.

Aurigny seems keen to invest, but it won’t happen without the States funding it – which links the decision inexorably to the runway question.  Why invest in ATRs if there is a decision to lengthen the runway – or, as some would rather put it, why lengthen the runway if not doing so could secure Aurigny’s future?

One important side-issue is whether new turbo-prop aircraft can do the job better than additional jets, whether Embraer or Airbus.  We need to know whether the “clear vision” technology is peculiar to the ATRs for a start.  We do know they will be larger than the existing ATRs, and that they may well be better than jets as short haul work-horses. But there is no point in buying or leasing any ATRs if Gatwick Airport decides they want jets only.  No one knows the chances of this happening.

Likewise, if the ATRs are meant to compete on any routes other than Gatwick, we need to judge whether Aurigny could compete successfully on open skies routes.  Leave aside that it has already proved itself unable to tolerate the losses competing with rival Blue Islands on the Guernsey-Jersey route when it teamed up with FlyBe to cut its own losses.  The more important question is whether a sub-scale Aurigny with limited routes and limited-use ATRs can out-compete larger and more efficient airlines flying larger standard jets at efficient route utilisation levels.

This in turn begs the question of whether it would be more cost-effective for passengers and better for economic development if the States itself were to contract with external carriers and subsidise them to fly key routes.  Answering this question would mean contemplating the diminution of Aurigny – which some politicians may be unwilling to entertain.

Such questions offer an indication of what the States’ open skies plan, which is due to be debated by the States assembly, might entail.  In its pure form it will throw all the affected routes into the hands of anyone prepared to compete for them.  The wide expectation is that frequencies will be higher and more profitable on these routes in the summer, fewer and loss-making during the winter. Winter travel to and from the affected destinations will default to other hub airports at best.  This is hardly an improvement for the users, even if fares are lower. But this is what happens, for example, in Ibiza, which in winter you access through mainland Spain.

As for Guernsey airport, it is important to be clear about its ability to cope with expanded numbers of passengers and aircraft movements under a rosy view of the future.  Would this also mean significant capital spending?  In the meantime there are suggestions that it should levy its landing charges in a more discriminating way – that is, favouring Aurigny as a fellow States-owned entity, thereby erasing the “rob Peter to pay Paul” aspect.  This would probably be illegal as well as mindless.

From all this, it is self-evident that a number of balls are in the air, and – dare one say it – a number of key people are focused on the ball in their hand rather than those flying (literally) around them, each intimately connected with the other.

To mangle the metaphor, who has the balls?  The answer is the Gang of Four:  Gavin St Pier, Lyndon Trott, Charles Parkinson and Peter Ferbrache.  These individuals occupy the four most powerful positions in the land.  Here’s what they might consider doing:

Given the way that government works (“the States assembly is sovereign”), everyone knows that in the absence of whipped parties nothing will be done without a strong majority of the 40 deputies agreeing.  If these four gentlemen cannot agree, we may as well pack our hand luggage.  But if they can, their biggest political task will be to convince their fellow deputies, and the community, through a comprehensive evidence-based business case that the course of action they themselves support is the one all should back.

The alternative is likely to be a split assembly supporting one side’s opinion rather than another’s and a community living to repent at leisure – as has more or less occurred with debates on education, waste management, population management and, some would argue, the missed opportunity when the runway was remodeled.  This is not just today’s “critical infrastructure debate of the decade.”  It may well determine whether Guernsey’s standing relative to Jersey becomes like Alderney’s in relation to Guernsey.

–On Aurigny’s current monopoly of Guernsey-Alderney, the less said about the Dorniers purchased for this the better. The earlier Trislanders were approaching a dangerous sell-by date and had to be replaced, and the choice of Dornier aircraft may have been justified.  But the transition was a shocker, and Alderney has unfairly taken the blame for the losses attributed to the route.

–There is an indisputable need for improved frequencies on the main intra-island route to Jersey and to nearby France, but this issue seems to have been lost in the larger debate.  For some reason the Guernsey-Jersey route is not deemed strategically important, while connections with France apparently lack potential.  Businessmen now find it cheaper to fly to and from UK  destinations via Jersey than to travel direct.

–It is often overlooked that Guernsey’s runway is in the wrong place, at the highest point on the island.  Almost anywhere else, the fog disruption would be less.  But the cost of rebuilding elsewhere would be prohibitive, notwithstanding the benefits of re-developing the existing site.  Although the notion is surely a non-starter, it hasn’t stopped a prominent businessman proposing it.

Views: 399
We use cookies to ensure that we give you the best experience on our website. If you continue to use this site we will assume that you are happy with it. Find out more.