Ahead of the pre-poll hustings, a guide to your choices - whether or not you vote 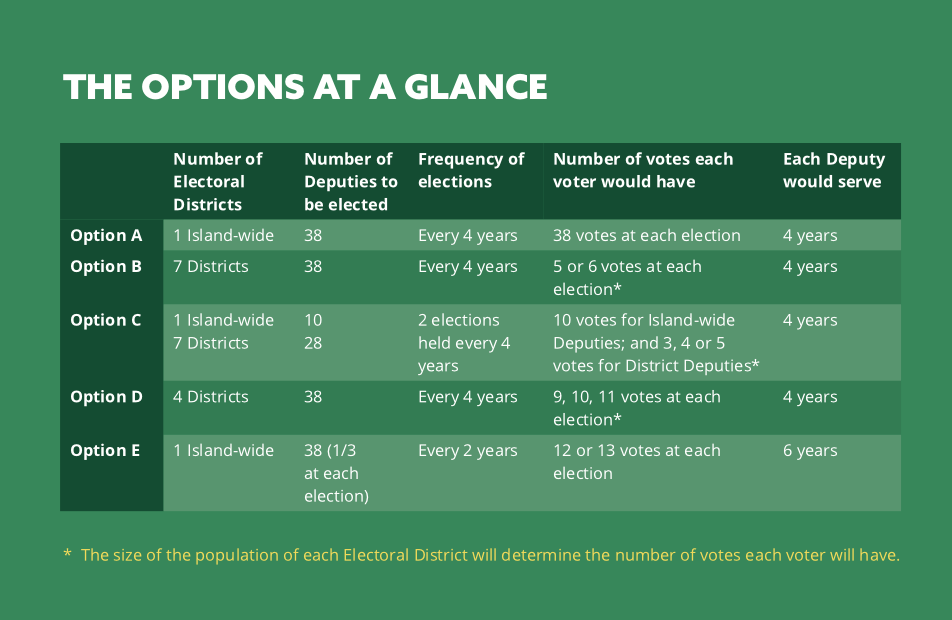 Voters in Guernsey are being asked to choose their electoral system for the future.  For those perplexed by the decision they face on 10 October, here is a simple guide:

— It is not a referendum: no particular question is being put to us.  It is a test of our preferences.

— It is not a dependable test of preferences.  You are expected to rank your choice among five possibilities.  But you don’t have to.  You can support one alone, or rank two, three or more.

— If you want full-frontal island-wide voting, make Option A your top choice.  But if it wins, you won’t know how it will work, because that hasn’t been worked out.  If you are nevertheless confident about Option A, to help it win you might want to avoid ranking anything else, in order to deny the other choices any chance of succeeding.

— If you want the status quo (no change), make Option B your top choice.  If you are absolutely sure about your view, you should avoid ranking anything else.  But you can equally help it come out top by not voting at all, in the process driving the resulting turnout lower than the stipulated 40% of the electorate for it to be legally binding.  You would then have to live with the guilty knowledge that you have not exercised the world’s most perfectly distributed political right, namely the vote.

— If you want a “Neo-Conseiller” regime as we had in the 1990s, choose Option C.  Again, if you absolutely dislike all the other choices, don’t indicate a ranking.  If your choice wins, it will produce two different classes of deputy (no matter the denials) legitimised by different electoral bases.  Will the “neo-Conseillers” then take the top jobs?  Who knows?  Also:  if voting for island-wide candidates does not occur on the same day as for the smaller constituencies, losers in one may compete in the other.

— If you like the idea of larger constituencies without jumping to an island-wide one, Option D is a “status quo-plus” choice.  It would enlarge the constituencies and increase the number of seats for each one.  As a voter you may be lucky to find a larger number of attractive candidates to choose from and perhaps have a better chance of seeing them get a seat.  No certainty though.  And no certainty whether things will evolve further towards island-wide voting.

— If you want to move in phases towards island-wide voting, Option E is effectively “IWV-lite.”  All deputies will become island-wide representatives, but one-third of them will be elected every two years.  How we would transition to this is unspecified – hence the term “IWV-lite” initially.  Ultimately it would entail a regular turnover of deputies, each serving six years.  This will end the four-yearly upheaval we currently experience, but could equally produce greater assembly sclerosis than now.  We voters may tire of elections in the meantime.

Overall, we’re being asked to state preferences among options where key details remain unclear.  Hardly surprising, then, that there is still some argument about them, and that not all of the options have found supporters to lead the case for them.

Other things you need to know:

— If on your ballot paper you list your preferences rather than just state your first preference, your second choice will carry weight once your first choice has failed to secure a majority (and so on) until such redistributions deliver an option with a winning majority.

— If the turnout is below 40%, the underlying question about the electoral system goes back to the States.  The assembly would treat the outcome as advisory and discuss whether to make a change. Would it make any decision between now and the next election?  You have to wonder.  If the matter doesn’t die, it will surely wither on the vine.

— Whatever system materialises, it will not ensure that more or “better” people run for office.  That depends on a host of matters.  At the very least prospective candidates see a trade-off between the costs and benefits of becoming a deputy.  This is only partly an issue of monetary reward: compare what might happen when you pay deputies £100,000 per year vs. paying them nothing but expenses, and you will pity the body recently appointed to consider the matter yet again.   In any event, candidates must still decide whether, as deputies, they could make a difference.

— It will still not ensure more effective decision-making.  Many people think this requires “better” candidates, political parties or executive government.  But perhaps things are simpler.  Perhaps we just need to make the existing committee system work better – not by adding deputies to the assembly but by having smaller committees and, most importantly, coordinating their work better – perhaps even collaborating as a team.  This may take more than a technical fix.  It may require personalities capable of making it happen.

The upshot of all this for the forthcoming poll is that voters have to make tactical decisions.  One is whether to vote.  For many, not to vote will go against the grain – it is not often you are given the chance to influence politics directly. The difficulty in this case is that you can promote a desired end (no change) by not voting – a real weakness in the offering before us.

A second tactical decision is, having decided to vote, whether to vote for one option or to rank the choices.  Ranking your choices means you are facilitating possibilities that you might not otherwise countenance, so you may want to limit your range of ranking.

These convoluted considerations tell you that the deputies who brought you this choice couldn’t make their minds up either.  There is no solution which tells you that one outcome will be better than another.  The result is frustration for any voter who thought they might be making a strategic decision.  What we are having instead is an unprecedented multi-choice preferential vote on, er, different forms of electoral system.  How ironic is that?