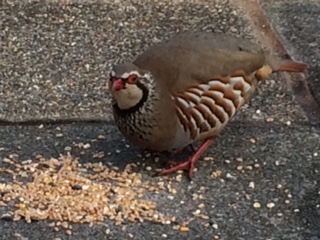 Any regular bird-spotter in St Peter Port knows what to expect when indulging his hobby.  Seagulls, crows, magpies, doves – all unavoidable, and almost too common to bother watching.

Then there are the goldfinches, greenfinches, great tits, blue tits and of course the much-loved robins.  All in decent numbers, but so much more seductive to watch.

If you venture out of Town, you also have a good chance of seeing a hovering hawk or a soaring buzzard.  You used to hear skylarks above the Common, but sadly that no longer seems to be the case.

But here’s an unusual one.  Just off Belmont Road, between King’s and Queen’s Road, a striking Red-Legged Partridge (pictured) has recently begun paying regular visits to the garden of John Warren.  John, who’s in his 80s, calls him Percival, and sometimes Percy, and the relationship seems to be blooming.

The bird will not only flutter down from the top of John’s back garden wall when called.  He will wander determinedly over to the house, enticed by the sounds of a rattled paper bag of bird seed, and promptly start pecking away once the food hits the ground.  Occasionally he also drops in on the front garden.  Astonishingly, he barely jumps if a car comes near.

Who is this Percy, and where does he come from?  Known as Alectoris Rufa, the Red-Legged Partidge is described by the experts as a plump, round gamebird. His colour is sandy grey-brown, with intricate black and brown barring on his sides and a white throat surrounded by a black necklace. What identifies him is his bright red beak and pink-red legs.

Percy most likely hangs out in one of the few local fields and large gardens south of Belmont Road. Red-Legged Partidges are most common in farmland, where they feed on seeds, leaves and small invertebrates. They breed in open scrub and arable areas, laying their eggs on the ground.

They were originally native to France and Iberia, but were introduced into the UK by Charles II in the 1600s to be shot by hunters.  The RSPB says they are wary birds. When disturbed, they prefer to run instead of fly, but they will fly short distances if they need to retreat hastily or evade predation.

Surveys in the UK suggest a significant increase in the number of Red-Legged Partridges, released mainly onto shooting estates.  Such large-scale releases for hunting and shooting can apparently lead to localised extinction of the native Grey Partridge.  Because the birds are also semi-tame, it is not unusual that they should turn up on the UK’s urban streets.

In St Peter Port, though, it is much more of a surprise. The RSPB says these birds seldom move more than a few miles from where they hatched.  So what is going on?  Has Percy – not to mention his partner – actually been bred in the Bailiwick?

The answer may lie with information on the States website. It is permissible to hunt partridges in Guernsey between 1 October and 31 January.  Hunting permits only allow shotguns to be used in places like Lihou, Herm, the island’s Common and specified cliff areas.  So it looks like Percy may well have been bred.  And for now he is also alive.  If he continues to linger where he is, it looks like he will be well-fed too – thanks not least to John.