That Movie: You don’t have to like it to appreciate it 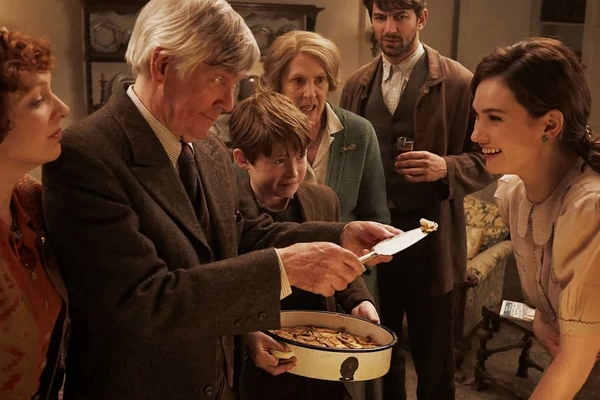 Lucky, we were.  Offered two tickets for the less formal of the premiere screenings of “The Guernsey Literary Potato Peel Pie Society” at Beau Sejour, our anticipation just grew.   The film’s pedigree was nothing if not distinguished – director Mike Newell (Four Weddings and a Funeral, Donnie Brasco, Mona Lisa Smile and Harry Potter and the Goblet of Fire) and producers Paula Mazur, Mitchell Kaplan and Pete Czernin (if you haven’t seen Czernin’s Three Billboards Outside Ebbing, Missouri, you should).

Reviews have not been entirely kind  – “A glutinous 40s-period exercise in British rom-dram solemnity” (The Grauniad), “So anaemic you feel the urge to feed it a pint of Guinness” (Irish Times). But the film itself is charming if you are not expecting high drama: as Paul Whitington writes in The Independent, it is “not without a certain retro charm”.

Juliet Ashton (Lily James) loses her parents during the War to become a well heeled orphan with aspirations to join the literati and (judging by her looks and costumes) the glitterati. She pens a series of wartime recollections which are published and popular and is then under pressure to write more but also to marry her equally well heeled American boyfriend. At which point, an ever so slightly random letter arrives from a pig farmer on Guernsey who has acquired a copy of Lamb’s Essays with Juliet’s name AND address in it.

Needless to say, this piques her curiosity and also her unspoken dissatisfaction with her life. Learning from farmer Dawsey Adams (Michiel Huisman) of the literary society that formed in wartime occupied Guernsey, Juliet becomes so fascinated that she must visit on the pretext of researching another article.  And so the exploration of life on Guernsey during the War begins.

It is a rather schmaltzy version of history, but for me these two central leads didn’t carry my conviction, certainly not in any passionate romance between them. Luckily there is strong ensemble playing in support from a knight and a dame (Tom Courteney and Penelope Wilton) who always shine, and gin queen Isola (Katherine Parkinson).  It is the feisty Elizabeth (Jessica Brown Findlay) who first conjures up the Society as an instant response when a group of them are caught drunk after a night-time illicit hog roast.  These characters are excellent and could have been more fully explored but for the fact that the film is overlong already.

Following this screening, I was impressed at the Lit Fest talk the next day by Annie Barrows (co-author), Paula Mazur (producer) and Thomas Bezucha (screenwriter). Genuine and warm people, they spoke with enthusiasm about the process of creating the film. Adapting an epistolary novel peopled with many voices is challenging and inevitably the narrative of film simplifies this. Bezucha, the third writer to be involved with the project, had a tough job taking the work of others and making it his own. I really liked his point that he had to find his own way through the story to make sense of it for the screen, and that his bright light moment came when he saw it as the journey of an orphaned young woman searching for the family she had lost.

Equally, Annie Barrows’ observation that the film for her added a different layer to the narrative – making for an even clearer storyline – was generous and interesting.  I’d have to say that this narrative clarity had not come across to me so clearly the night before. But I will look out for that when I see the film again!

It goes without saying that this long-awaited production, like the book, offers unique promotional publicity for the island. While we await the full impact, give top marks to the team that took advantage of the occasion of its release to stage the local screening and Lit Fest talk – and in the process raise much-needed funds for our Arts Foundation.