Ahead of summer days, a listicle to tickle your imagination 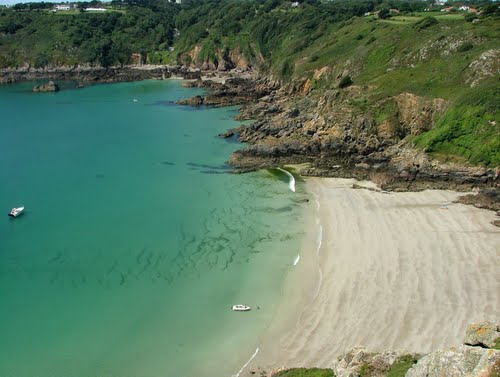 Four years ago, local man Adam Bayfield along with his friends Gordon MacRae and Tony Curr decided to produce a book which, surprisingly, had not previously been written.  Called Guernsey Beach Guide, it identified 26 seaside havens – five in the south of the island, six on the east coast, 12 down the so-called west coast, and three in the north.

If you wanted to know the optimum tide or wind direction for your visit, or each beach’s best and worst feature, or the beach that offered the best swimming or was the most secluded, this was the book for you – and it was in handy paperback to boot.

What it didn’t do, however, was provide an order of preference.  Plainly this is a difficult thing to do, given the sheer variety of amenity and the beaches’ variation across the tides or through a run of weather fronts.  Still, if you prompt Adam, here are his top five, with notes drawn in part from the Guide:

1  Petit Port (south coast, pictured):  Accessible via 400 awkward steps from one of our highest cliffs (“on the way back up it’s tempting to pitch a tent half-way”), at high tide it’s a tiny wave-beaten cove, while at low tide it reveals a vast expanse of sand on which lovers have been known to scribble marriage proposals visible from the cliff path above.  According to the guide, swimming is always spectacular, and this is the one beach “not to be missed,” even though (worst feature) it lacks any facilities.

2  Port Soif (west coast):  Guernsey’s most distinctive beach, largely for its unique horseshoe shape, and one if its most charming and most popular (“set up camp…and quickly lose hours of your life sunbathing or reading a book…”).   Its name (meaning “thirsty port”) reflects its worst feature – the complete loss of water at low tide – but also its best, namely swimming in a clear lagoon at high tide.  Another bonus: its well-known kiosk.

3  Pembroke/L’Ancresse (north):  Surely a family favourite, and not just because of its car parks and easy slipway accesses; this is also one of the island’s largest – limitless sand for games, BBQs, winter dog-walking, kite-flying, and of course swimming and sailboarding.  The huge tides can make it a long sandy walk to the water.  Add in the Martello towers and wartime fortifications, and you can see why this might have been an ideal spot to launch an amphibious invasion of the island.

4 Marble Bay (east):  If you want a good view of our neighbouring islands, this is a natural spot, and a secluded one, approachable along attractive paths.  But it’s better in the mornings as the sun rises to its zenith rather than the afternoons, when the sun disappears behind the cliffs and the typically chilly water becomes, er, even more bracing.  The beach is mainly rocky, but the smoothed stones “make fantastic skimmers.”

5 Petit Bot (south):  Another of the island’s most popular beaches, accessible by car, bike or on foot down a leafy valley and offering rock pools and cave as well as an expanse of sand at low tide.  A single Martello tower makes a distinctive feature, and the nearby kiosk is a bonus.  Car parking is a little limited.  But the shelter offered by the adjacent cliffs provides excellent nearby walks and views.  The cliffs also deter anyone from splashing around in the later afternoons, but a swim around the western headland will take you to neighbouring Portelet beach which is otherwise inaccessible.

Adam offers one important caveat regarding his list: “This is entirely my personal preference. If you asked me again next year, I’d probably give a different ranking.”