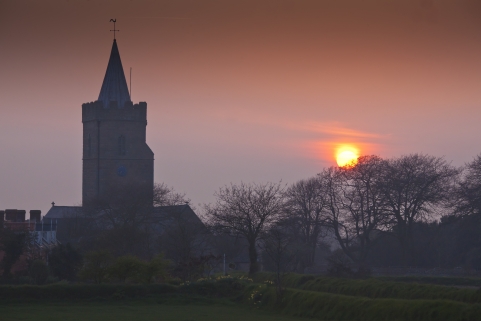 What happens when you die?  Whatever the medical and religious professions may say in their complicated ways, the legal view is pretty clear: your relatives (or executors) seek probate – that is, they have your will “proved” in a court of law and accepted as a valid public document.

In Guernsey, unusually, this is not done in a conventional court, but rather in the Ecclesiastical Court, an institutional relic whose history harks back to the 13th Century.  In essence, it is a church body which does the job, dressed in legal garb.

In recent times many have argued that it is no longer appropriate in the 21st Century for the Church of England to be issuing probate and using much of the resulting surpluses it accumulates in its Deanery Fund for repairs to its churches.

While they acknowledge that funds also go to worthy charities, they believe a wider network of charities could benefit.  And although they do not seriously dispute whether the Court successfully discharges its obligations, they have sought greater clarity about the Court’s efficiency, in particular its overheads and the fees it charges.

The Court does other things unrelated to probate – issuing marriage licences for example – but the probate fees are an interesting feature.  Charging for probate work is not unusual elsewhere, but in Guernsey, which has no inheritance tax, the levy on the personalty (not the realty) of a deceased person – thought to be £35 per £10,000 up to a maximum of £100,000 – looks like just such a tax, albeit a low one.  Being value-based, the fee is a bone of contention.

Amid all this, the current Dean of Guernsey has recognised that the Court is something of an anachronism, and to his credit has headed off the challenges facing the Court by arriving at an accommodation with the island’s secular leaders which avoids the outright government intervention which might otherwise have occurred.

The result is that, over the coming three years or so, the institution’s probate-granting responsibilities will transfer to the island’s Royal Court, and the proceeds of this activity – estimated to average some £700,000 per year – will accumulate to the States’ general revenues.

One question which is not clear is whether the Royal Court’s new responsibility to levy proceeds of probate will be more or less costly than the existing arrangements.  Likewise, there is a fear that these proceeds will be lost altogether in the larger pool of taxes, rather than hypothecated for use by the Third Sector, that is, the island’s charities.

On this, there has been much talk in recent years about combining probate proceeds with other revenue sources like lottery proceeds and so-called escheated assets lying unclaimed following death – basically pulling these amounts together for distribution to charitable causes.

Back in 2017, the States made a big decision to create a Social Investment Commission to administer such sums.  This sounds like a good idea: pool the various fund sources, use them to fund Guernsey’s wide variety of charities in a more efficient way, and have a body which can hold the charities accountable and be accountable itself.

Two or three concerns have arisen.  For one thing, the Commission project has taken a long time to get under way and it remains uncertain whether its target start-date on 1 January 2019 will be met.  Its full terms of reference have not yet been published, nor its Commissioners named.

Meanwhile the island’s top politician heading the Policy and Resources Committee, when he unveiled the plans relating to the Ecclesiastical Court, stopped a long way short of committing even the net proceeds of probate from going to the Bailiwick’s voluntary sector or more general good causes.

Indeed, it would seem that the Commission’s funds are likely to finance those existing charities which offer services that the States would like to outsource, and that one of its tasks would be to assist in setting up new charities to do just that.  Crucially, the money would be described as ‘lent’ to these charities and ‘repaid’ over a ten-year period from savings that the States would make by outsourcing.

The suspicion is that the Commission will be the conduit for funding voluntary sector initiatives only if they are in accordance with the States Policy and Resources plan and are focused on improving social outcomes within the Bailiwick.  In other words, these funds are intended to support the States’ own social aims and may not be as benevolent towards the wider voluntary sector as they appear on first reading.

Given this, it is not too difficult to question whether the Commission’s funding activities will be as effective as the Ecclesiastical Court in these areas.  Yes, it may be inappropriate for probate proceeds to have been distributed solely at the discretion of the church.  But in one way or another they were at least directed by a non-States entity for the independently-judged benefit of the community.

It is plainly too soon to know the answer, but the questions are already being asked.  If a certain detachment from government is something which ideally should continue, this is an issue the Commissioners on the new body may have to confront.  Representatives of the voluntary sector eager for the changes may also need to be careful what they wish for.